PDIS is a PC based information system for process data collected from industrial plants (power generation, oil&gas, chemicals, etc.). The PDIS database is a Data Warehouse of process, laboratory and logistic data. Data transfer to the Data Warehouse is highly automated. The data can be imported from the most frequent industrial sources (PI, PHD, AIM*, Industrial SQL server and others), data files (text, Excel), but manual input via a keyboard is also enabled. PDIS can also serve as a simple and still powerful generic data presentation and analysis tool for the most frequent industrial historians like PHD (Honeywell), PI (OSIsoft) or other systems equipped with the OPC interface.

Data can be imported also with the aid of ChemPlant's data validation program Recon. In this way, aside of raw process data, also consistent reconciled data and data calculated by advanced thermodynamic and other models can be later available in the PDIS Database.

PDIS can manage data from small plants to large companies. Typical number of tags is in thousands or tens of thousands. Data can be used by many ways described below. There are two Graphical User Interfaces for data presentation available:

In general, data can be presented in numerical or graphical form (time trends). The numerical data in the graphical form can be transferred by a single mouse-click into an Excel file table. For PDIS it is typical that in the area of data presentation, the individual users have the same possibilities as the administrator. They can create their private screens, reports, etc.

One important problem is "How to find data I am interested in?" The possibilities are as follows:

Screens are the most common way of data presentation. Screens are usually based on the underlying scheme (flowsheet) describing some part of a plant, production process, etc. On the flowsheet there are objects enabling access to data.

The following objects on screens are available in PDIS:

The underlying pictures (carpets) in screens can be either bitmaps copied from somewhere or created in some 3rd party software. There is also a special vector flowsheet editor included in PDIS. This editor includes a library of typical industrial apparatuses, instrumentation and other objects needed for such drawing. 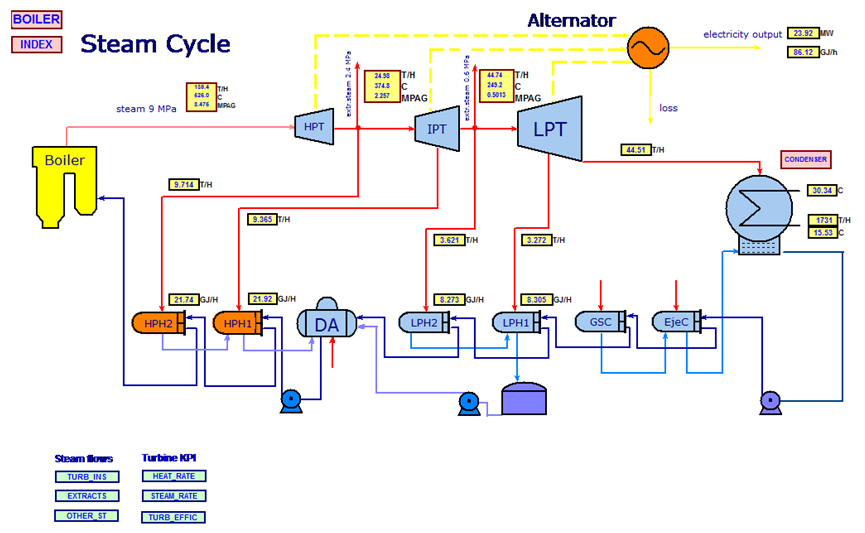 There are broad possibilities to configure trends of variables (graphs) as concerns the time interval, number of variables on one graph, etc. All trends can be either printed or transferred to other presentation tools (MS Word, MS Excel, etc.). 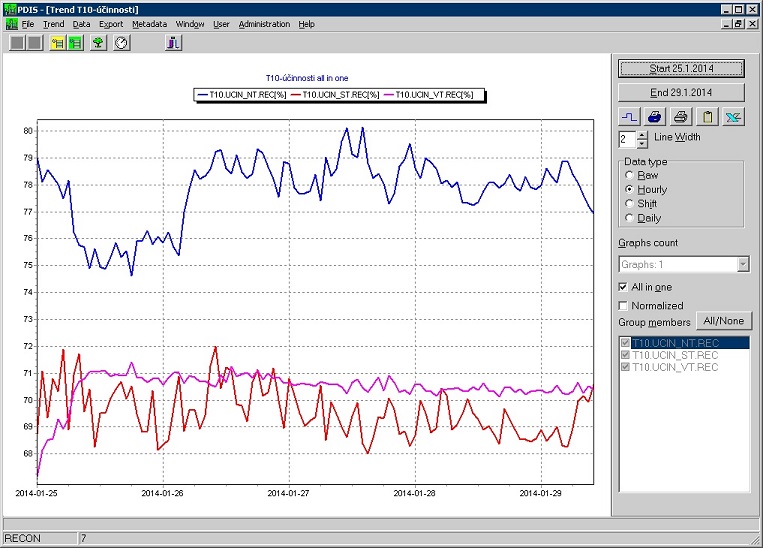 All process data in the PDIS DB can be exported as Excel files. This can be done either from any trend screen (what you see you can export) or in a special menu on the basis of common or private groups). Exported files contain also basic statistical characteristics of exported time series.

Data exported to an Excel file.

Reporting in PDIS is based on user-defined MS Excel templates, which can be either public or private. Reports can contain any functions, graphs or tables available in Excel. Each template contains links to the PDIS database. Reports can be created either on users' demand or automatically (for example at night) and distributed by means of the company LAN or Intranet. Created reports including their history can be presented via PDIS's screens or a special report viewer. 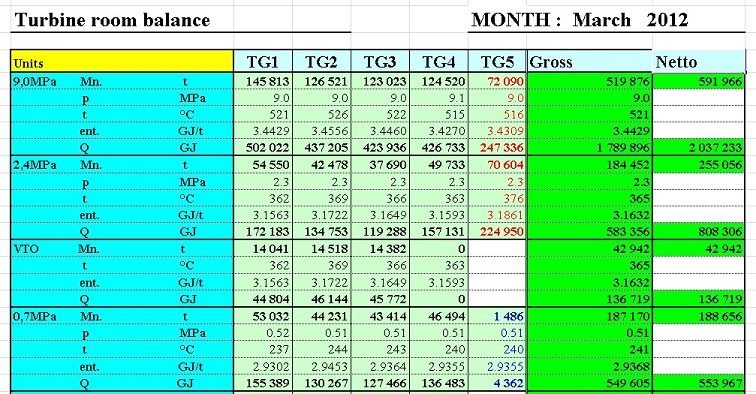 A simple balancing table in an Excel report.

A part of an Excel report generated by the PDIS' reporting engine.

A trend created in an Excel report.

There are about 30 functions enabling one to configure any possible data structure which can be further used by standard Excel functions (graphs, etc.).

PDIS contains several included modules and separate programs which are fully integrated with PDIS. They are targeted at several areas of detailed data analysis, data enhancement a process optimization.

PDIS is fully integrated with Recon - ChemPlant's program for mass and energy balancing, data reconciliation and validation. Recon can be used during the data import to PDIS database to

Recon can be run in so-called simulation mode to predict behavior of a plant under changed conditions. Such calculations are inevitable in the process of plant's optimization - to compare a real state with the optimum. Results of simulation can be saved to the PDIS DB.

A long term database of validated data contains invaluable information about plant's history, which can be exploited in optimization efforts. PDIS contains a Data mining module enabling one easy and fast creation of statistical (correlation and regression) models. Such models can be used for prediction of plant's behavior under changed conditions. By a few key strokes a user can easily create multiple linear/nonlinear regression models among process variables. Attention is also paid to the statistical analysis of process data and to automatic removal of outliers.

The correlation matrix presentation in the Data Mining module

A regression analysis in the Data Mining module

Prediction of plant's behavior on the basis of a regression model

KPI monitoring in PDIS is based on a special sort of Score Cards - so-called Technological Cards (Operating Windows). Technological Cards (TCs) are groups of variables belonging to one task. For individual variables there can be set limits and targets in which the variables should be maintained during the optimum and safe operation of a plant. The limits and targets can be either fixed, depending on modes of operation or functions of some control variables. The compatibility of a real plant function with TCs is presented in the following tabular form, where rows represent variables and columns represent time.

EMan is the information system for

An interactive dashboard in the Energy Management System EMan

By clicking any of screen objects, the user sees a graphical trend of tags linked to the object (drill down). Data underlying graphs can be exported to an Excel sheet.

By clicking on Accept cookies, you agree to the storage of selected cookies (necessary, preferential, performance, marketing). Cookies aim to improve the functioning of our website, measure its performance and use our advertising in a targeted manner. You can freely decide which cookies will be stored under the Edit settings button.
Cookie statement.

We use cookies and other technologies for a better user experience on the web. You can enable or disable the following categories and save your selection.

Preferences cookies are used to remember the settings of your preferences for the next visit.

Performance cookies monitor the performance of the entire site.